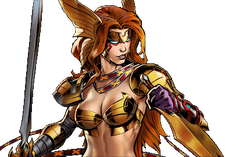 Angela's origin is the same as that of her Earth-616 counterpart.

Angela eventually came back to her homeland, Asgard, when Karnilla was ruling. Together with the Enchantress, they captured the witch and brought the realm back to safety.[1]

After Odin's death, Angela was crowned the new Queen of Asgard.[2]

Highly skilled with many weapons.

Retrieved from "https://marvelcomicsfanon.fandom.com/wiki/Aldrif_Odinsdottir_(Earth-1010)?oldid=268611"
Community content is available under CC-BY-SA unless otherwise noted.