Marvel Fanon
Register
Don't have an account?
Sign In
in: Characters, Templated Articles, No Dual Identity,
and 28 more 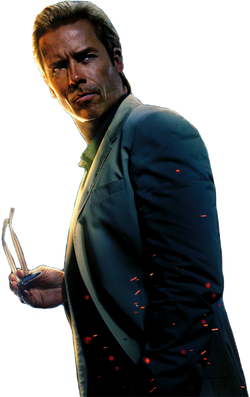 No, I'm a visionary. But I do own a maniac and he takes the stage tonight.

Aldrich Killian's origin is the same as that of his Earth-199999's counterpart.

Back to the Future

Kang the Conqueror traveled back in time to 2012, when he told Aldrich Killian about how he failed to defeat Iron Man and Pepper Potts and died on Christmas Day. Promised a new attempt to life and revenge, Killian agreed to join the time-traveler's Masters of Evil.[1] Killian and Iron Monger, now alive in the present day, traveled to Stark's Malibu Mansion looking to get revenge on their nemesis. J.A.R.V.I.S. activated the House Party Protocol and the Iron Man armors were soon joined by Rescue and War Machine. Eventually, both Killian and Stane's lives were fixed by the Council of Kangs and their initial deaths remained unaltered.[2]

Thanks to Extremis, Killian displays various superhuman abilities, such as being able to regrow entire body parts and heal injuries very quickly, enhanced strength, a touch able to melt Iron Man's armor, and at one point channels the heat produced by Extremis to spit fire at James Rhodes.

Has an unstable mind, augmented by the virus.