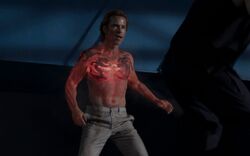 As humans, we only use a fraction of our brain power. My question is, what would we be capable if we unlocked our full potential?

Aldrich Killian was once a gifted scientist who was obsessed with working alongside Tony Stark. However, after facing blatant rejection from Stark, Killian went down a darker path.

He found himself involved in the organization the Advanced Idea Mechanics, which operated from the shadows and developed cutting edge technology illegal in most countries. This provided Aldrich with the opportunity to work on his Extremis project, which gifts the user the ability to control heat from within their body, should they survive the process.

Killian went through the Extremis process himself and went on to hire Trevor Slattery to pose as the Mandarin so that he could enact his plan without drawing attention to himself. However, his ruse was eventually uncovered by Iron Man and the Avengers, who cracked down on AIM. During their final confrontation, Iron Man was forced to kill Aldrich by trapping him inside a suit of armor that was set to detonate.

Retrieved from "https://marvelcomicsfanon.fandom.com/wiki/Aldrich_Killian_(Earth-101)?oldid=249036"
Community content is available under CC-BY-SA unless otherwise noted.