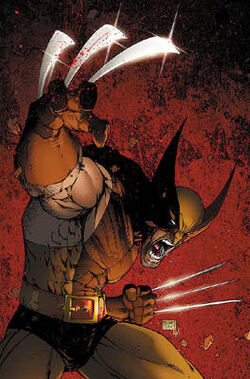 Let's see if second-rate Wolvie here is still the best at what he does!

Albert is a mechanical duplicate of the famous X-Man, Wolverine, created by the nefarious Donald Pierce. He was once a nameless robot paired with a smaller android called Elsie Dee, both built to kill the immortal mutant. They were abandoned once they failed their missions, left to their own devices. At one point, Albert was separated from his "sister" by a mysterious man who later reprogrammed him for his own uses alongside some others. Albert was freed alongside his contemporaries, later banding together to form the Iron Avengers with their own wills. To this day however, his sister remains missing.

Albert possesses nearly all the powers of his template. Aside from Wolverine's healing factor, he is physically superior to Wolverine in every way. His mechanical composition means that he can't tire and is immune to pain. His increased weight does not hamper his speed and even the mutant's phenomenal superhuman senses are replicated by the robot's sensors. Most of his body is made of true Adamantium, with the notable exception being his omniurn joints. That said, he can also lift heavier weights and punch harder than his original version.

Albert is an expert martial artist who possesses the skills of the original Wolverine. He may not be implanted with all his memories, but he is implanted with nearly all the knowledge that the X-Man has. From swordfighting to multilingualism, Albert can do whatever the Wolverine can. It should be noted that his battles with his counterpart actually dealt some damage to his CPU, making him not truly as competent as Wolverine.

You're Wolverine's expy! What do you mean you can't regenerate?!

Albert's most notable weakness is his lack of healing factor. Even he admits that he couldn't win against Logan without even a limited amount of healing factor. It was noted that his speed is not hampered by his weight, but this means that he is greatly more exposed to a weakness he shares with Wolverine: drowning. He doesn't need oxygen or sustenance, but throwing him to the bottom of the ocean basically disables him. He's also susceptible to EMP's and electricity.

Equipment: Wolverine's brown-and-tan uniform. Allegedly, this is the original one the mutant wore in the past.
Transportation: Carrier-Zero.
Weapons:

Retrieved from "https://marvelcomicsfanon.fandom.com/wiki/Albert_(Earth-5000)?oldid=268451"
Community content is available under CC-BY-SA unless otherwise noted.