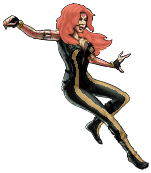 Loa has the same origin as her Earth-616 counterpart.

Loa and Crosta were sent to Atlantis looking to recruit Namor McKenzie, so he could become a temporary partial host for the Phoenix Force.

Loa is a mutant with powers that manifested around puberty. Her current powers include:

Loa is a skilled surfer.