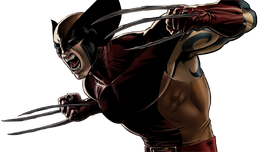 Black
Unusual Features
Large tribal tattoo extending from the center of his abdomen and covering most of his left pectoral muscle, trapezius, and arm all the way down to his fist;
Two retractable bone claws on the hand; one retractable bone claw on the undersides of his wrists.
Status
Citizenship

I never knew my father. I was raised...to be someone different than him. And now I'm supposed to be him. I never asked for that, but when the opportunity found me...I was curious. I wanted to know what it was like. To have people look at me and see...my father.

Akihiro's early history is the same as that of his Earth-616 counterpart.

Akihiro attacked his father and Rogue while they were at a bar. After engaging in combat with them, he activated a bomb and fled. Due to the telepathic intervention of Emma Frost, it was discovered that Daken had joined the Dark Avengers as their version of Wolverine[1]. When the Dark Avengers finally came into conflict with the Avengers, Daken engaged in combat with Scarlet Witch, Vision, and Wonder Man. He managed to control them with his pheromone powers, but after Vision threatened to kill him and gave him the chance to leave, he chose to do so, abandoning the team[2].

Superhumanly Acute Senses: Daken possesses superhumanly acute senses that are comparable to those of certain animals. He can see much further and with greater clarity than a normal human, even retaining much of this clarity even in near total darkness. Daken's hearing is similarly enhanced, enabling him to detect sounds normal humans can't and sounds they ordinarily could but at much greater distances. Daken's sense of smell is able to recognize people and objects by scent, even if they are well hidden. He can track a target by scent, even if the scent has been greatly eroded by time and weather factors, with an extraordinary degree of success. Daken can also use his keen sense of smell to detect lies due to chemical changes within a person's scent.

Retractable Bone Claws: Daken possesses three retractable claws housed beneath the skin and muscle of his forearms; two on the top of his hands and one underneath. Daken's bone claws have been shown to be black in color with a very rough texture in contrast to the light color and smooth texture of his father's claws in their natural state. Daken has two claws which emerge from between the skin of his first and third knuckles. These claws are much harder and denser than normal human bone and their natural shape provides them with a razor sharp edge capable of easily slicing through flesh and bone very easily, and able to penetrate metals as durable as Iron Man's armor.

Pheromone Control: Daken possesses another unique ability, the full nature of which is unknown. Daken has demonstrated the ability to manipulate his pheromones for the purpose of suppressing his own scent to such a degree that even Wolverine's senses are unable to detect him. He can also use his pheromones to manipulate the emotional state and sensory perceptions of other beings. He has been known to use this power to instill intense fear, happiness, depression, sexual arousal, and a false sense of security to other beings. This allows him to seemingly appear where enemies can't see him, enabling him to inflect damage before an opponent realizes it. Such tactics give opponents the belief that he can either teleport or move at superhuman speeds, though he doesn't possess either of those powers. His pheromone powers appear to be physical in nature, not psionic. Daken used this power unconsciously during his youth and formative years, which was a primary reason his adoptive mother didn't love him, though the mysterious Romulus has taught him to consciously use and control it. He also appears to have great knowledge as to the capabilities of pheromones in general as well as their taste and smell. In conjunction with his enhanced senses and knowledge of pheromones, he can expertly judge the emotional/physical state of those around him, both animal and human.

Telepathic Resistance: Daken has also demonstrated immunity to telepathy. His mind contains a "trap" awaiting anyone attempting to delve into his head. This trap gives him the ability to control the telepath who has entered his mind. It's also able to restore lost memories.

Master Martial Artist: Daken has proven himself to be a superb hand to hand combatant. Cyber trained Daken at one time and acknowledges that Daken has superior skill. Daken has proven this skill by besting both Wolverine and Deadpool. A good deal of his success, however, can also be attributed to his unique ability to use his pheromones to alter the perception and emotional state of others. This gives him a tremendous advantage during combat situations. Daken was also trained as a Samurai.

Skilled Acrobat: Since Daken doesn't have adamantium inside of him, he is more light weight, and can do more "acrobatics" in the air, which also gives him an advantage against his opponents. He is skilled in gymnastics, acrobatics and aerials capable of numerous complex maneuvers and feats.

Expert Tracker and Hunter: Due to his enhanced sense of smell, Daken is a dangerous tracker and has memorized many different scents.

Multilingual: Daken has shown the ability to speak English, Japanese, Greek, and German. He maybe able to speak more due to training from Cyber and Romulus.

Excellent Strategist/Tactician: A good example of this is when he frees his father from the S.H.I.E.L.D. base he is being held at.

Master Manipulator and Deceiver: Contributed by his emotion altering ability; he excels at scheming planning and coaxing other into doing his dirty work for him. Often even tricking people to accomplish goals for him therefore achieving his own ends.

Daken's healing factor grants him great physical strength, as his muscles tire less and constantly repair any strains in his muscles he cant exert himself to a greater degree than humanly possible, though his strength does not reach superhuman levels. While the exact amount of weight he can lift isn't known, he can lift at the very least twice his own body weight; at least 334 lbs but no more than 800 lbs.

Carbonadium Digestion: Daken's healing factor can be dramatically slowed if Carbonadium is implanted inside of him, such as swallowing something made of Carbonadium or being wounded by a bullet composed of it. It causes his healing factor to be reduced to a slow crawl, at least in comparison to its normal speed, but doesn't fully suppress it.

Heat Pills: Temporarily cancel and slow the healing factor for a short time.

Muramasa Blade: This sword nullifies healing factors, and is capable of killing Daken.

Retrieved from "https://marvelcomicsfanon.fandom.com/wiki/Akihiro_(Earth-1010)?oldid=268362"
Community content is available under CC-BY-SA unless otherwise noted.