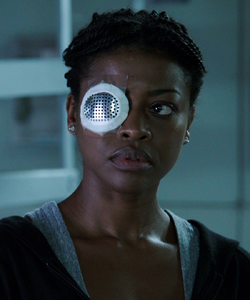 Akela's early history is the same as that of her Earth-199999 counterpart.

During the time Amador's right eye was replaced with an ocular implant, she lived under the constant threat of death due to the explosive charge within it. This threat was used to force her compliance in committing acts that she would otherwise never do.

Akela Amador has reduced depth perception due to the loss of her right eye.

Retrieved from "https://marvelcomicsfanon.fandom.com/wiki/Akela_Amador_(Earth-1010)?oldid=217720"
Community content is available under CC-BY-SA unless otherwise noted.