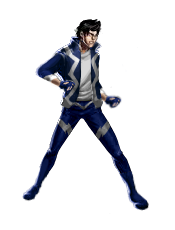 Ahura's early life is similar to that of his Earth-616 counterpart.

Ahura challenged his father to a fight, while the latter was under the control of Maximus the Mad. When he was forced to scream out the word "Genocide," Ahura flew in the path of the hypersonic sound waves and absorbed the blow. After being freed from Maximus' control, Black Bolt took Ahura to the care of Vinatos. When he awoke, his evil eye had manifested.[1]

Black Bolt and Medusa, in order to protect their son from the Council, sent him to Afterlife, so his unstable powers could be trained.

Even before he went through Terrigenesis, Ahura already had powers, but they were relatively dormant:

He has an unstable mind.

Retrieved from "https://marvelcomicsfanon.fandom.com/wiki/Ahura_Boltagon_(Earth-1010)?oldid=254988"
Community content is available under CC-BY-SA unless otherwise noted.