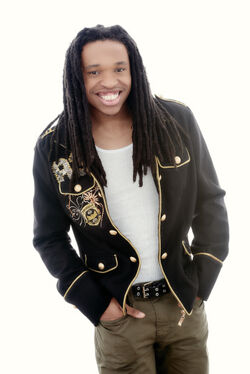 Single
Occupation
Student
Education
High School - 12th grade
Origin
Origin
Human mutate; A.J. gained his powers from the energy bolts of a Zirainian crystal that was found in New York City by OSCORP while walking home from school. He was struck by the bolts after the crystal overloaded the systems in the OSCORP labs, which not only enhanced his blood cells, but gave him extraordinary powers such as stellar bolt projection, cosmic beam emission, electricity attacks, and flight.
Place of Birth
San Francisco, California, USA
Creators

Ahmir-Jordan Kwame Washington was born in San Francisco, California on June 8th, 1993 to middle-class parents Lisa Marie Washington and Mawunyo "Rafiki" Kaimenyi one minute before his sister Chayana, making him of African-American, Kenyan, and Ghanaian descent. Since a young boy, Ahmir-Jordan or just A.J. has always looked up to superheroes ever since he was introduced to them. He even looked up to his father, Mawunyo, as his own personal hero because he joined the San Francisco Police Department after dating Lisa and has done dangerous duties to keep the city safe. Unfortunately, his happiness came to an end when he received the news from one of his father's partners that he was killed by a vicious gang during a gang fight right before his and Chayana's birthday. Severely torn by the loss, A.J. vowed that someday, he would take his father's place in protecting the city.

After his father's death, A.J. moved to New York City with his mother and sister to start anew and he started going to Downtown Manhattan High School, where he met his friends Samantha Hale, Schuyler Buckingham, and Chika Morizuka. He even had some bullies that kept on pestering him such as varsity football star Butch Sanderson and his on-and-off girlfriend Clarissa Millhouse, who got into trouble with the teachers and the principal mostly.

When A.J. was walking home after having a rough day in school, he noticed strange purple-colored lightning bolts zigzagging across the sky which caught the eyes of other bystanders. Then suddenly, one of the bolts descended from the sky and struck A.J. in the chest, which started surging through his body, making him pass out. After he was checked out of the hospital, he started getting major headaches when in school and one day he passed out in front of his friends, much to their horror. Soon, the symptoms started to wear off and A.J. started to experience major changes within him: he could blast star-based energy bolts and electricity from his hands and gained the ability to fly while trying to get Chika's homework assignments.

One day, he noticed a robbery going down where a group of young thugs had stolen money from the National Bank of New York and made a get away in a big black van. A.J. saw how distraught the bankers were and he took action by using his new powers to thwart the robbers and return the money to its rightful owners. But when he got home, he told his mother and sister about what happened and was scolded by both of them. He told them that he had gained superhuman powers, and demonstrated them to prove his honesty. He was told that he shouldn't put his life in danger because he had lost his father in a shooting, but A.J. told them that he had vowed to be a hero like him, and with his new powers, he was going to keep the promise.

A.J. isn't much of a fashionable person, but his mother has really good taste in fashion. A.J. tends to be seen wearing eagle-printed designer t-shirts, designer jeans, and different pairs of Jordans. A.J.'s hair is worn in long dreadlocks that are down to his back, and would sometimes tie them into a ponytail or with a bandana.

A.J.'s suit is made of 100% spandex and its design is created completely by his mother, Lisa Marie Washington. His suit is dark blue with white and gold/yellow highlights. On his chest is a large white star with golden highlights as well as lightning bolts on each point, zig-zagging horizontally and diagonally from the torso and chest. He has white gloves with golden cuffs, white boots with gold trimming on the triangular tops, followed by a golden belt with a star-shaped buckle sporting a yellow jewel in the center. He has blue opaque sunglasses, and a white star-shaped eyemask with yellow highlights. And to make his suit stand out, he wears his father's brown leather bomber jacket, insisted upon by Chayana.

A.J. is your typical friendly young man who can get along with almost everyone. Growing up in the Bay Area, he is the sociable type and would love to start a conversation with anyone around him. Despite being in a middle-class family, A.J. is completely from the street inside and out and isn't afraid to pick a fight. He's shown to be very loud and stubborn when he's in his "street-mode" and would often say "You trippin!", "Y'all somethin' else." and his mostly used quote: "Damn!" which all shows a bit of a comic side of him and it sometimes get his hero allies involved. Also, he has a very hot-temper and would blow up when he's provoked which is mostly caused by Wolverine's teasing.

Retrieved from "https://marvelcomicsfanon.fandom.com/wiki/Ahmir-Jordan_Washington_(Earth-2010)?oldid=268019"
Community content is available under CC-BY-SA unless otherwise noted.