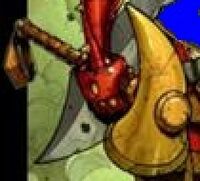 Dimensions
The shape is that of a horn head about a foot long and a handle of equal length. The handle is wrapped in leather that is stated to be unbreakable that ends in a loop.
Owners

Aglaea's Graces is an enchanted Olympian made of enchanted Adamantine, similar to Hercules' Mace. It was presumably first made by Hephaestus as a gift to his new wife Aglaea. Its current owner is She-Hulk 2099. She found it in a secret cave known only to the women of the Knights of Banner.

Like Mjolnir, it can only be picked up if the person(s) is deemed worthy, but unlike Mjolnir it can only be used by women. It grants the wielder an ability to increase upon the physical perfection and beauty of mortal women, generate water, and can return after being thrown by will. The Hammer also possesses other properties which have yet to be completely revealed.

Retrieved from "https://marvelcomicsfanon.fandom.com/wiki/Aglaea%27s_Graces?oldid=267874"
Community content is available under CC-BY-SA unless otherwise noted.