"Agent Venom" is the fifth episode of Assemble!'s Season Five and the one hundred and eighth episode overall.

-Are you ready?- Spider-Man turned around and looked at his friend.

-Always ready, Spider-Man.- Agent Venom smirked, as the two faced Taskmaster and Beetle atop a crane.

-You will never stop us…- Taskmaster smirked. -Spider-Man and his friend…-

-Agent Venom. Yes.- Tony Master nodded, getting his sword out of his sheath.

-I’ll go after him.- Agent Venom gave Spidey a thumbs up before facing Taskmaster. -You won’t forget me after I beat you. And I don’t mean your memory issues… You’ll just never recover from it.-

-Agent Venom! You will never defeat Taskmaster!- The man got his shield out and started battling the symbiote. Flash jumped and fired the small anti-personnel guns in his shoulders. However, after having fought Iron Man, Taskmaster shielded himself.

-You are predictable! You are a cheap knockoff! Your fighting styles? Overused. Those mini-guns… seen them too. Do you have anything that makes you… Unique?-

Enraged, Agent Venom lost control of the symbiote and was taken over by Venom, viciously attacking the HYDRA member.

-WHAT?!- Taskmaster blocked his attacks gracelessly, unable to predict the symbiote’s next move.

-Flash! No!- Spidey turned around at his friend, while holding Beetle tightly. The wall-crawler swung towards Flash and stood between him and Taskmaster. -FLASH STOP!!!-

-You can do it… Just… Focus. Don’t lose control. Concentrate.-

After some seconds, Flash went back to his Agent Venom form. However, Taskmaster was gone, leaving Beetle behind.

-Looks like your white pal abandoned you.- Thompson looked up at Jenkins, firing his mini-guns at him.

Beetle graciously dodged most of the bullets, and protected himself from the last one activating a force field around his body.

-Let me evaluate that!- Agent Venom jumped and hit Beetle’s head with both hands, destabilizing him. Immediately afterwards, he started punching deep inside the Beetle armor, piercing the metal until Jenkins’ skin was visible.

-FLASH!- Peter yelled as he realized that his teammate was about to lose control. To avoid this, he shot a web at his friend and pulled him back to the crane. Beetle’s armor was damaged enough for him to be unable to keep himself up in the air, falling to the ground at an incredible speed.

-Tadaaa!- Agent Venom extended his arms and smiled at Peter.

Without saying a word, Spider-Man got back to ground level and was headed to an alley to get his costume off.

Suddenly, Peter turned around. -You cannot be so reckless, Flash! You let your rage control you! I can’t lose you! I can’t lose someone else in my life! My parents, Uncle Ben, Gwen hates me… I can’t lose one of my best friends just because he gets angrier than he should!-

Parker pointed at him with his index finger. -With great power comes great responsibility, Flash. It is something I learnt the hard way. And I don’t want you to go through something similar. I want you to think about that before the damage is done.- Agent Venom looked down as Spider-Man swung away.

-Oh, yes. I’ve worked with HYDRA in the past.- Ian Quinn nodded, looking up at Abner Jenkins. -Traitors… They backstab you whenever they can.-

-Can you help me?- Beetle asked the leader of Quinn Worldwide.

-It depends on what you can give me back.-

-I… I am an aircraft mechanic… I have developed many of the original technologies that comprise my armor… But I need equipment. My partner Fixer used to help me with stuff he stole from HYDRA, A.I.M. and Roxxon Corporation… But now he’s dead. And this armor was our last invention. So I got nothing to work with.-

-No need to worry anymore, partner. Cybertek and Quinn Worldwide can help you with technology. This will be a really interesting partnership.-

Spider-Man and Agent Venom walked inside the Baxter Building’s lab, where Mr. Fantastic and Major Glenn Talbot were going to evaluate Flash’s control over the symbiote. Before Thompson went inside the lab for his tests, he looked at Peter.

-I… I have been thinking about what you said. You’re right. I should be more careful with my feelings…-

Spidey put his hand on Agent Venom’s shoulder. -It’s OK, Flash. When I was the symbiote’s host I was extremely violent too… And Venom and Torment… And every other symbiote are examples of that too.-

-You already are.- Peter smiled. Suddenly, H.E.R.B.I.E. got inside the lab.

-The Beetle… He is back and more powerful than ever!-

-Thompson.- Glenn Talbot said, walking inside to the heroes. -Everything’s ready for your testing.-

-I’m sorry, Major Talbot, but there’s something else I need to take care of.-

As the two heroes got to the HYDRA warehouse Beetle was attacking, they found that the villain had already blocked every entrance.

-There’s no way in…- Flash looked at Spider-Man.

-There is…- Peter looked down.

-Yes. I trust you. I trust you can handle the symbiote, keep it in check. Just… Focus. Destroy this door and then you back to human form.-

Reluctantly, Agent Venom closed his eyes, transforming into Venom not long afterwards. The symbiote violently ripped the door open before the two heroes got inside the warehouse. Once they got in, Flash could go back to his Agent Venom form.

-Oh! You didn’t have enough on the crane?!- Beetle yelled.

-Try me!- Jenkins aimed every new weapon at the two heroes. -I have support now! Deathlok technology!-

-Flash, go soft on him.- Peter looked at his teammate.

Shooting a web, Agent Venom propelled himself towards Beetle, punching his head. Jenkins flew away, before firing his guns at the former soldier. Using his football skills, Flash could dodge every bullet and fired his own mini-guns at Beetle. As Abner was about to activate his force field on his technological gauntlet, Spider-Man shoot a web at it and pulled it off his hand. The bullets hit Beetle and he tried to attack Flash with whatever he could.

Taking the hits, Agent Venom tried his hardest not to turn into Venom as he grabbed a grenade and tossed it at Beetle, who dodged it. The missed grenade activated the mines Jenkins had activated around the warehouse, creating multiple explosions. The villain took this chance to fly away, considering his goal had been achieved. Flash, seeing himself and Peter in danger, turned into Venom as he grabbed his friend and helped him escape.

Outside the destroyed warehouse, Venom put Spider-Man on the floor before turning back into Agent Venom. When Peter regained consciousness, he took his mask off and smiled at his friend.

-You could do it. You turned into Venom without hurting anyone.-

-I… Thank you, Peter. I wouldn’t have done this without you. You… You didn’t doubt me when I was doubting myself, and that means a lot, considering our background.-

-That’s in the past, Flash. We are now teammates… We are now friends.- 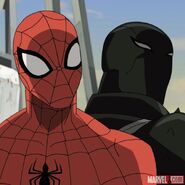 "Let me evaluate that!"

"I… I have been thinking about what you said. You’re right. I should be more careful with my feelings…"

"I have support now! Deathlok technology!"

Agent Venom vs Beetle
Add a photo to this gallery

Retrieved from "https://marvelcomicsfanon.fandom.com/wiki/Agent_Venom_(A!)?oldid=267749"
Community content is available under CC-BY-SA unless otherwise noted.