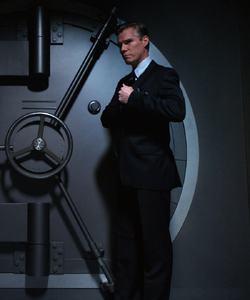 Before the Battle of New York

Tyler worked for S.H.I.E.L.D. as a mechanic during the events before the Battle of New York.

While performing maintenance on a Quinjet after the Attack on the Helicarrier, he was approached by Captain America, Black Widow and Hawkeye. Tyler initially told the trio that they were not authorized to use the Quinjet, to which Captain America replied "Son, just don't".

After the Battle of New York, Tyler became a field agent. After the attempted rescue of Dr. Franklin Hall from Ian Quinn's compound in Malta, Phil Coulson instructed Tyler to take the Gravitonium that Quinn had obtained and to store it in The Fridge. Coulson further instructed Tyler to remove the identification placard from the storage entrance, due to Franklin Hall's concern that the Gravitonium was too dangerous and might fall into the wrong hands.

Retrieved from "https://marvelcomicsfanon.fandom.com/wiki/Agent_Tyler_(Earth-1010)?oldid=118436"
Community content is available under CC-BY-SA unless otherwise noted.