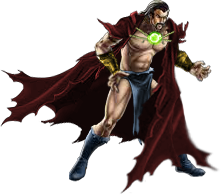 Earth-1010
Base Of Operations
Light dimension, which is accessible through his artifacts. Agamotto's Dimension
Characteristics
Gender

Agamotto's history is similar to that of his Earth-616 counterpart.

Agomotto was glimpsed by Jean Grey alongside the other Avengers defending themselves against their corrupted teammate, the Phoenix.[1]

As the Sorcerer Supreme, and the spawn of an Elder God of Earth, a realm where magic appears especially attuned, Agamotto possesses extremely powerful magical abilities, which he can channel to certain mystics, mainly the Sorcerer Supreme of the mainstream Earth dimension, sufficient in strength for him to usually defend his reality. Agamotto has held his own against entities of such power as Dormammu and Galactus on several separate occasions when they clashed, making it apparent his full power can rival either's. It has been hinted that he is more powerful than both Oshtur and Hoggoth combined, despite being the spawn of the former. As the Vishanti, their power and omniscience is even further magnified. Agamotto specializes in divination and truth, such as the Eye of Agamotto's all-revealing light. Agamotto is described as "all-knowing," implying omniscience in dimensions even beyond his own, or at least potent mystic sensory abilities. So powerful are his abilities to gather knowledge, that he even has classified information concerning Cosmic entities in other universes. Agamotto is even capable of resurrecting others, as he did to Cadaver, as well as opening time portals.

Equipment: Agamotto's "pipe" is actually a powerful magical artifact that assists Agamotto with his magics. He is also in some way powerfully linked to the Orb of Agamotto and the Eye of Agamotto, able to recall them across dimensions from even the grasp of a Sorcerer Supreme at whim.
Transportation: None known.
Weapons: None known.

Retrieved from "https://marvelcomicsfanon.fandom.com/wiki/Agamotto_(Earth-1010)?oldid=266915"
Community content is available under CC-BY-SA unless otherwise noted.