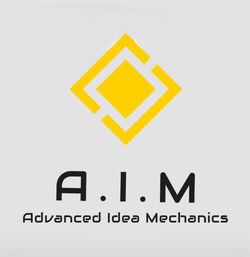 Advanced Idea Mechanics, better known by its acronym A.I.M., is a secret weapons and intelligence agency. An organization of brilliant scientists and their hirelings dedicated to the acquisition of power through advanced technologies.

A.I.M. was the top buyer of weapons from Stark Industries until Tony Stark announced that he would no longer be producing weapons. Afterwards, Obadiah Stane contacted the A.I.M. President and advised him not to worry as Stane promised that a merger would make both companies stronger, more profitable and safe from outside influences, and the A.I.M. President expressed interest in going through with the alliance.

Soon after Stark Industries was sold to Obadiah Stane, Stane offered to begin working together immediately, and sent some new technology to A.I.M. to find out what they could do with it and what they could find out about the Arc Reactor.

Stark's friend James Rhodes informed him of A.I.M.'s suspected occupation of a nuclear base in Russia, stating that the United States Armed Forces could not send in troops for fear of starting a nuclear war. Once Pepper Potts confirmed that A.I.M. had been Stark Industries' top buyer, Stark set out for the base. Stark destroyed all of the Stark Tech at the base, then was informed by F.R.I.D.A.Y. of a strong radioactive signal. Following the signal, Stark encountered Boris Bullski, who wore radiation-powered armor similar to the Iron Man suit. Due to the limitations of Bullski's suit, Stark was able to defeat him.

Upon returning to the United States of America, Stark expressed his disgust at A.I.M.'s use of nuclear weapons. Meanwhile Stane was furious when the A.I.M. President informed him that they had not finished the prototype of the Arc Reactor. The A.I.M President requested a more complete version of Iron Man's armor to help the engineers along.

A.I.M. forces led by Bullski launched an attack on the Stark Tower in an attempt to steal the Iron Man suit. Stark defeated Bullski and his troops, but not before Bullski revealed that Stane had been working with them. Stark confronted Stane about his involvement with A.I.M., and Stane incapacitated him. He soon recovered however and was notified by Rhodes, who informed him that Stane had captured Potts.

Meanwhile, once A.I.M. completed the prototype of the Iron Monger armor, Stane ordered them to prepare it for mass production. However, Stark defeated Stane and infiltrated the base and destroyed their battle suits and the main emitter soon after.

Retrieved from "https://marvelcomicsfanon.fandom.com/wiki/Advanced_Idea_Mechanics_(Earth-981)?oldid=236242"
Community content is available under CC-BY-SA unless otherwise noted.