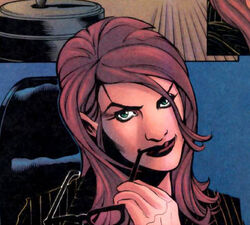 Adrienne was the older sister of Emma Frost, and a mutant with psychometric powers. Ever since she was a child, she admired her father to an incredible extent, and joined him at bashing her brothers Deacon and Christian for their lack of powers and homosexuality. However, she was extremely disappointed when her father chose Emma to be his heir, and considered her a fool for rejecting it, resulting in hate towards her whole family.

As an expert manipulator, she got in the Hellfire Club as an accountant. However, after realizing she was a mutant filled with rage, the young Black King, Sebastian Shaw, invited her to be part of the Inner Circle as the White Queen. Adrienne immediately accepted, convinced that it would give her the money and respect she deserved since birth.

One day, while in her Hellfire Club chamber, she was picked by a mysterious man and taken to the top of the Golden Gate Bridge. Extremely shocked to find out her brother, Deacon, was a vampire, she dismissed him for having to earn powers unnaturally. Not doubting it, he sliced her throat and pushed her off the Bridge.[1]

Psychometry: ability to touch an object and instantly know a history of many events concerning the object such as all of its previous owners, events that took place around the object, and the possible future of the object and its future owners. She showed a plethora of versatility in using this power.

Emma couldn't read her mind due to her psychometric powers and due to the fact that they were siblings and cancel each other powers in a very similar way to Cyclops and Havok.

Exceptional businesswoman and an expert manipulator.

Retrieved from "https://marvelcomicsfanon.fandom.com/wiki/Adrienne_Frost_(Earth-1010)?oldid=204155"
Community content is available under CC-BY-SA unless otherwise noted.