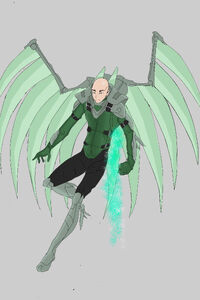 Adrian Toomes was a wealthy business man until J. Jonah Jameson wrote articles in the Daily Bugle which led the city to investigate him. They found that his factories were causing mass pollution, so the authorities shut them down.

In the years that followed, Toomes became a full time thief and built up a fortune by stealing high tech equipment from other companies, making weapons out of them, and selling them to criminals. For his operations, Toomes constructed his own battle suit equipped with two huge mechanical wings, and adopted the guise of the Vulture. He also hired goons to accompany him in his robberies, and equipped them with heavy body armor and jetpacks that enable them to fly.

Toomes would later attempt to steal an experimental Vibranium sample from a Roxxon laboratory. His goons were moments away from detonating a safe that contained the Vibranium when Spider-Man showed up to stop them. He made quick work of the goons, but Toomes managed to escape. Days later, Toomes formed a diversion for the webslinger so he couldn't foil his heists any further by attacking the Daily Bugle Building. He demanded on live television that Spider-Man appear, or he would start eliminating hostages.

As soon as the moment presented itself, freelance photographer Peter Parker escaped into the shadows to re-emerge as Spider-Man. However, he figured out that the Vulture set a trap for Spider-Man, and no one knew that they planned to be the only ones getting out of the station alive. After Spider-Man disarmed all the Vulture's bombs in the Bugle, he freed the hostages and went after Vulture, foiled his Vibranium heist yet again, and left him to be arrested by the authorities.

Equipment: None known.
Transportation: The exo-suit's wings enable him to fly at speeds approaching 95 mph.
Weapons:

The Vulture also carries some form of sonic blaster he stole, as well as several grenades of unknown types.

Retrieved from "https://marvelcomicsfanon.fandom.com/wiki/Adrian_Toomes_(Earth-981)?oldid=250798"
Community content is available under CC-BY-SA unless otherwise noted.