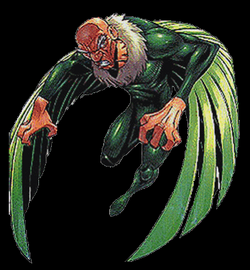 Vulture's history is identical to that of his Earth-616 counterpart up until Juggernaut was launched into space by Skaar. He began trailing Sandman after the latter teamed up with Juggernaut. Juggernaut noticed that they were being followed, but did not know it was Vulture, nor did he say anything.

After Sandman, Carter Ghazikhanian, and Juggernaut set out to find Cerebra to attempt to resurrect Squidboy, Vulture decided to confront them. Sandman denied that he was a villain any more, and offered Adrian the chance to reform and join them. He refused, and attempted to kidnap Carter. He was opposed by Juggernaut, who defeated him.

Temporary/Limited Levitation: It has recently been revealed that, due to his prolonged use of the harness, the Vulture can levitate or float his body even without the harness, however at a very slow speed. Like his other abilities, it is probable that this ability too would fade with time away from the harness.

Super-Strength: With the use of his magnetic technology, Toomes can provide himself with super-strength, being able to lift a water tank easily.

Electrical Engineer: The Vulture is intellectually brilliant in the fields of electronics and mechanical engineering, with a great talent for invention. He has earned a Master of Science degree in electrical engineering.

The Vulture has a new version of his flight harness that has supposedly been augmented by the Green Goblin. Though Vulture claimed that it made him several times stronger than his previous version (500% stronger) it appeared to be a bluff to frighten the Black Cat, who proceeded to beat him half to death. Considering she has no real superhuman powers and the severity of the beating she managed to give him it is very unlikely he was being entirely truthful. Vulture's harness also lets him fly virtually soundlessly.

Transportation: None known.
Weapons: The Vulture carries some form of plasma pistol and several grenades of unknown types.

Retrieved from "https://marvelcomicsfanon.fandom.com/wiki/Adrian_Toomes_(Earth-858)?oldid=266376"
Community content is available under CC-BY-SA unless otherwise noted.