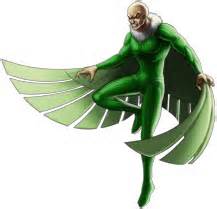 Little is known about the Vulture's life before the Secret Invasion. It can be assumed to be similar to his mainstream counterpart, as he and Kraven mentioned they were members of the original Sinister Six.

Supposedly hired by S.H.I.E.L.D. (although more likely the Taskmaster), Vulture gets a lead on the missing Daredevil & She-Hulk (who have previously been impersonated by Skrulls). However during the raid on the abadoned A.I.M. both were supposed to be held at, he was captured by the Skrulls. He was freed along with Cable & Daredevil (She-Hulk had been moved somewhere else) by Captain America, the Taskmaster, his longtime foe Spider-Man, and the Rhino.

Retrieved from "https://marvelcomicsfanon.fandom.com/wiki/Adrian_Toomes_(Earth-6109.2)?oldid=128534"
Community content is available under CC-BY-SA unless otherwise noted.