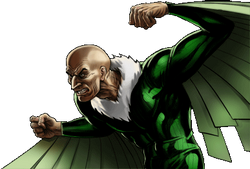 Young Adrian Toomes' history matches that of his Earth-120703 counterpart.

Adrian Toomes was present at the meeting of six OsCorp employees that would ultimately result in the Sinister Six. Adrian was given his alternate identity first, that of the Vulture, and was sent to capture Spider-Man. Ultimately he was defeated by Spidey and the Spider-Initiative. [1]

When the Sinister Six revealed themselves as a team, Vulture took on Spider-Man again, and seemed to gain the upper hand, but was forced to leave the battle when the students at the high school the Six attacked began to fight back. [2]

Temporary/Limited Levitation: It has recently been revealed that, due to his prolonged use of the harness, the Vulture can levitate or float his body even without the harness, however at a very slow speed. Like his other abilities, it is probable that this ability too would fade with time away from the harness.

Super-Strength: With the use of his magnetic technology, Toomes can provide himself with super-strength, being able to lift a water tank easily.

Electrical Engineer: The Vulture is intellectually brilliant in the fields of electronics and mechanical engineering, with a great talent for invention. He has earned a Master of Science degree in electrical engineering.

Augmented by his Flying Harness, the Vulture can lift (press) approximately 700 lbs. Without his harness, he possesses the normal human strength for a man his age, height, and build who engages in minimal regular exercise.

Transportation: He prefers flying.
Weapons: The Vulture carries some form of plasma pistol and several grenades of unknown types.

Retrieved from "https://marvelcomicsfanon.fandom.com/wiki/Adrian_Toomes_(Earth-1010)?oldid=256371"
Community content is available under CC-BY-SA unless otherwise noted.