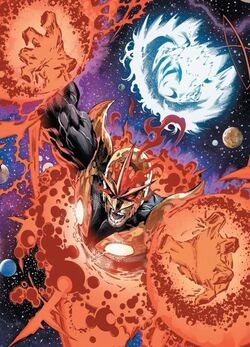 Glad to see all ya' murderin' folks out here... Remember me? I'll be the last face you'll ever see...

Adomox was a red-skinned Xandarian, and a high-ranking but usually disowned member of the Nova Corps who eventually felt dissatisfied with the distribution of power among the Corps, thinking it wasn't enough for him. Seeking more power than was granted to him, Adomox formed the Black Novas, an elite offensive unit of the Corps which used his secret technology to illegally gain access to the full power possible from their helmets. This would ultimately sap power from the Nova Force as a whole, in order to progressively augment their own strength for their personal glory and gain, as long as the Corps didn't find out about their personal schemes and agendas and shut them down.

The Corps defended their home on the Battle of Xandar, cooperating with the Guardians of the Galaxy and Yondu's Ravager Clan after Nova Prime decided to trust them. Partly through the Corps' valiant efforts, including those of Adomox and the Black Novas, to kill off the flying forces of Ronan, the battle was narrowly won, with many members of the Corps giving their lives before Ronan was finally defeated. After the battle, the Guardians went through with Gamora's plan to entrust the Orb to the Nova Corps, believing they were one of the few organizations that could be trusted not to use it, no matter the possible motive or cause.

Nova Prime Irani Rael then assured them of their good intentions and locked the Orb in a secure vault on Xandar. In gratitude, the Nova Corps expunged the Guardians' criminal records to allow them a fresh start, although Adomox still felt like he had to keep an eye for the former heroic outlaws, and he considered trying to retrieve the Orb from the secret Nova vault for himself if deemed necessary to gain more power and recognition within the Nova Corps.

Adomox and his Black Novas were present during the unexpected finale of the Kree-Skrull War, serving as back-up and reconnaissance for the Nova Corps against both Kree and Skrull forces. After countless millennia, the Kree-Skrull War ended, thanks to the explosive forces of Ms. Marvel, Captain Marvel, Guardians of the Galaxy, and the Nova Corps, managing to end it after only a couple of months. The war ended with an armistice and subsequent peace treaty between the two races that was authorized and concurred upon by an alliance of neutral parties (including Xandar) across their galaxy who sought to end the nigh-eternal war by all means necessary.

Unbeknownst to the rest of the Nova Corps, Adomox managed to earn tons and tons of galactic credits profiteering off selling to the black market under different aliases, secretly revealing that he was responsible for fueling the war between the hostile nations until the heroes' intervention finally concluded it. Adomox was genuinely successful in being careful and discreet with his illegal activities.

Due to the neutrality of the Xandarians and the Nova Corps' decision not to intervene with the Skrulls' invasion on Earth despite the Terran heroes' pleas, Adomox and his crew simply laid back in greed and sloth as they celebrated their victory inside their headquarters at the Xandarian orbit's Space Station. They were pleased that they earned plenty of credits, and mocked the Guardians of the Galaxy and their allies behind their backs for being too soft on the inside. Despite this, they swiftly set their course to the blue planet to save it from being taken over by the soldiers of the devious Skrull Empire. While the battle for the fate of Earth ensued, Adomox and the Black Novas continued their black market businesses and participated in other crimes, which involved his executing former clients who were either whistleblowers or supposed business rivals.

Thanos, having decided to hunt for the Infinity Stones personally with the assistance of his powerful armies due to the failures of his consultants for the past few years, chose the Power Stone protected by the Nova Corps as his first destination. During the attack, Adomox faced off against Corvus Glaive and Black Dwarf of the Black Order with the rest of the Black Novas, which unfortunately resulted with Adomox and his team being defeated. Most of his men were slain by the two bloodthirsty warriors, and Adomox was temporarily paralyzed after getting impaled by Corvus' glaive. Much to Adomox's despair and anger, Corvus decided to spare his life, knowing that he was just like them due to the Order figuring out both Adomox's discreet illegal activities in the black market and his sheer fierceness and often unpredictable tactics in combat. The only difference, however, was that Corvus felt that Adomox was such a waste for not embracing his true, narcissistic self and relying only on the power of the Nova and his own people.

Mercilessly leaving the injured Adomox for dead, Corvus and Dwarf fled to the other parts of Xandar as Adomox longed to avenge his fallen comrades and hoped to kill the Black Order the next time they met. Despite all of the Nova Corps' efforts, the Mad Titan effortlessly killed every single member of the Nova Corps and took the Power Stone, and then wiped out half of Xandar's entire population as part of his goal to balance the universe and discreetly please Lady Death herself.

A few years since the quest for the Infinity Stones ended with Thanos' apparent death and the separation of his Black Order, the latter's Ebony Maw and Corvus Glaive finally set their journey to the undisclosed Nova prison, but not before traveling to Sakaar, where they effortlessly freed Black Dwarf from the Contest of Champions, and executed their plan to release Midnight and bring the Order back into action. Maw went to great lengths by causing a massive riot within the facility due to his persuasion, biding them a lot of time to track and save the imprisoned warrior, which they successfully did. However, their success was abruptly interrupted by Adomox, who was willing to kill them all to gain more recognition among the Corps and be promoted to the position of Nova Prime. Unbeknownst to the Order, Adomox had been tracking them since Glaive was caught on one of the surveillance cameras in Sakaar during their mission. Believing that the Order's abrupt arrival was somewhat of a blessing to him, Adomox was thankful that he didn't have to do much to find the man he was looking forward to killing.

Maw and the Order tried to fight and kill Adomox for their freedom to restore the organization once more, but all of them were fairly matched by the cosmic power of the Centurion alone, granted by the Nova Force. Thankfully, just when Adomox could have crushed Maw's skull with a single stomp, Adomox's head fell off and he dropped to the ground, dead. It was immediately revealed that he was decapitated from behind by a hooded giant with a giant sword similar in appearance to the Godslayer, showing the murderer to be none other than Thanos himself, seemingly back from the dead, much to the Order's surprise. In his final moments, the beheaded Adomox could only stare in terror as the Mad Titan removed his Black Nova helmet from his severed head before crushing it into a million pieces with his bare hands to clear the evidence that Thanos has now returned, before finally dying out of blood loss.

After the great escape of the Mad Titan and the Order, both Adomox's corpse and severed head were later found by his comrades within the Black Novas, who felt that they might eventually be caught and framed for the illegal deeds that Adomox started several years ago, leading them to intentionally disbanding the Black Novas and later fearfully confessing to the Nova Empire for their crimes under Adomox's leadership. Along with it, the Guardian of the Galaxy Rocket Raccoon also delivered several footage and audio recordings which showed and exposed some of Adomox's criminal activities, something that he habitually does whenever he encounters the Nova Corps since Rocket often distrusts law enforcement (or almost anyone else for that matter), especially ones whom he could sense to be "more a-holes than they are."

Sending it to Nova, Rocket's files posthumously proved Adomox's crimes to be true. As a result, most of the Black Novas' equipment was confiscated due to its illegal use. Though the search for the Order continued for the next few months, the Nova Corps have yet to find the Order, who they sought for the murder of Adomox and other Nova officers. Adomox's body was cremated by the Corps as an act of formal tradition, although he was later discredited as a hero by the Xandarian government, sparking a controversy within Xandarian society. A case is still underway to decide whether or not to put his jar of ashes in Xandar's Grave of Heroes, due to his heroic actions in the Corps compared to his crimes.

Nova Force Enhancements: Nova Adomox had a slight but consistent access to the Nova Force through his special and modified Nova Helmet, a vast energy source that he can access to grant himself a number of superhuman attributes. As an often user of the Nova Force, which was also used to empower all members of the Nova Corps throughout the universe, Adomox is possessed of tremendously augmented strength and durability as well as enormous quantities of energy that allows him to hold his own against other powerful beings.

Retrieved from "https://marvelcomicsfanon.fandom.com/wiki/Adomox_(Earth-61615)?oldid=264453"
Community content is available under CC-BY-SA unless otherwise noted.