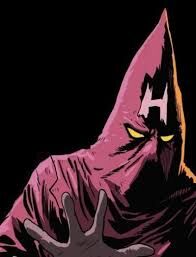 Hate Monger is the name adopted by Adolf Hitler's consciousness throughout multiple cloned bodies. Armed with a gun that controls hatred, he wishes to plunge the world into racial purging. Hate-Monger has died several times, but his consciousness has always transferred itself to other bodies prolonging his existence. Arnim Zola took place in this process and helped Hate Monger continue.