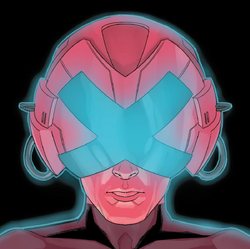 You taught us that there is merit from working hard. Just because I am no longer a mutant does not mean that I get to stop working. In fact, I must work harder. I will not be going anywhere, Comrade Rasputin. The Institute is my home, and is full of my family.

Adewale was a fairly normal Zambian child. He went to school as much as possible and worked alongside his mother at a farm (his father was unknown to him). His childhood was mostly free of incident, though he was often ridiculed for wanting to stand up to the poachers in his area, but being too afraid to do it himself. As such, he primarily spent time with his mother, wishing for ways to make a difference.

Eventually, the poachers heard of the scrawny farmer boy who wanted to stop them, and decided to execute him just to make an example of him. When they arrived in his village, they located his home, and he hid while his mother attempted to convince the poachers that they had the wrong place. They attacked her, and in the stress, Adewale’s powers manifested. He grew more than a foot in height, and gained over a hundred pounds of muscle, and attacked the men. Though no match for him, they put up a fight, and they were armed. Adewale was only able to force a retreat, however, after he accidentally broke the neck of one of the men. The men swore they would be back, forcing Adewale to go on the run, leaving his village, and his beloved mother, behind.

He spent months migrating from village to village, eventually forced to leave even his beloved homeland behind. He couldn’t stay in any one place too long, because his powers were activated by his own fear, and almost everyone was afraid of the juggernaut that was Adewale, and in their fear they lashed out, making him afraid and exacerbating the problem. Eventually, he was able to intimidate his way on board a flight to America, where he hoped to be more than an urban legend, a monster. However, there was no American dream waiting for Adewale. Instead, his destiny consisted of abandoned buildings and stealing any food he could. He’d heard of a community of underground mutants, but chose not to seek them out for his own stalwart hope that someone, anyone, would not turn him away for what he was.

That day came when he encountered Lucas Bishop while he was off-duty from his role as a police officer for Mutant Town. Though Adewale did not know what he was, Bishop could recognize that he was a mutant, and directed him to the Xavier Institute. There, he became a student, although somewhat reluctantly at first. Concern from the instructors led to the knowledge that the loss of his mother was behind his lack of motivation, so Colossus, Storm, and Adewale returned to Zambia, discovering his mother was alive and well. She returned with them to New York to be near her son, and once she had her own apartment (at her own insistence), he returned to his studies whole-heartedly.

Once the students were divided up into squads, Adewale eagerly joined the Proletariats under Colossus' guidance. There, he worked even harder than before to be a strong fighter, a reliable teammate, and a good man. His efforts were noticed by his teacher, as well as by his teammates. Colossus became a father figure to him, and Surge like a younger sister. This is not to say he got along with everyone, however; he had no use for Omerta's closed-minded nature, and was often the one to keep him in line. Many of the other students were wary of him (likely due to intimidation, despite the fact that Adewale was and is the epitome of a gentle giant), causing him to stick with the Proletariats most of the time.

Though Adewale was unseen during the events of House of M, he was definitely seen in the aftermath, as one of the many victims of M-Day. Following this turn of events, he moved his mother into the Institute to keep an eye on her as he helped his classmates cope with their new reality. When the majority of the depowered students were sent home, Adewale fought to stay and help the X-Men move forward. This decision would save his life, as the buses carrying the students home were attacked by the Purifiers, killing everyone on board. Adewale fell into a great sorrow, but still did not abandon his "duties" at the mansion.

Return to the Institute

(Formerly) Fear: Adewale's powers used to activate uncontrollably whenever he was afraid. Training with the X-Men helped him to subvert this issue, although extreme cases of fear or anxiety may still cause him to bulk up unconsciously.