Oz is a master of dark mystic arts and has cat-like bats named Angkors that aid her in battle. Although it is unknown of her origin and place of birth, she is considered to be a powerful dark mage while being on the good side.

When Oz mysteriously appeared on Earth, she was alone in a forest without knowing where she was and what she was doing. She built a wooden house in the middle of the forest to keep her and her Angkors sheltered. Soon, people have seen the mysterious house in the forest and called the authorities to investigate the house. As the authorities checked the house, Oz assumed that the people were invaders of her property. She then used her Dark Magic to kill the "invaders" with ease. When people reported the incident to the news, people started to give Oz the term 'violet witch.'

When the Avengers decided to stop Oz from hurting any more people, they went to her to stop the terrifying actions she'd committed. But when they attempted to fight her, she nearly overpowered the Avengers. They questioned why she would attack people, she replied that they were invading her house. The Avengers said that they did not intend to do that, they merely wanted to see why an unknown house appeared in the middle of the forest. After thinking for a few minutes, Oz started to be sorry for her actions. When the Avengers and Oz made up, the Debian Robot Army showed up. The Debian army wanted to capture Oz to use her mystical powers to rule the galaxy. Oz and the Avengers refused and fought the Debian Army. As they were defeating the army, the Debian King showed up. The Avengers tried to stop the king from taking Oz, but they failed. Then, Oz and the king fought face to face in a magic death battle. Oz realized that she could use her staff as physical strength instead of relying on magic. Oz won the battle and the Debian King faded away as he said his final words to her.

Oh, so those were not invaders? Oops...

When Oz first appeared to the "invaders," she had a bubbly, yet ruthless attitude when she told them not to disturb the peace in her house. When the invaders refused and told her to throw her hands up, she mercilessly defended her home. However, after the battle of the Debian King, Oz was still bubbly, yet more humble when around the people that she loves. When she talk about magic to Wanda, she is passionate about the things that they have in common. Oz is also an understanding person, considering that she gives motivational talks when the Avengers lose someone that they love. 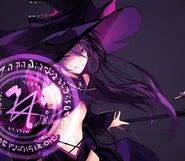 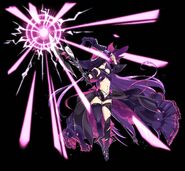 Dark Mystic Arts: Oz is a talented and powerful dark mage. She was born with a dark essence that flows around her body which gives her a massive amount of dark mystic powers. Oz is a true master of dark magic, acknowledged even by the Angkors. Oz is a master of wielding dark magic with the palm of her hands. She creates replicas of weapons that deities in hell use for lethal battles and creates a violet energy to detonate powerful attacks. She uses this power offensively to guarantee high damage to her enemies. She also uses her Dark Magic to manipulate her Angkors to shoot violet energy to acts as a flying shooter when she is occupied in the battlefield. Oz can create demon gods to temporarily aid her in battle when she is outnumbered by an army or a powerful enemy. She cooperates with her demon king/god to fight off her enemy. She also uses demon gods such as Angkors in order to cast spells to deal heavy damage in large areas. While creating violet energy and creating demon gods to aid her in battle, she channels her violet energy to create mist like attacks to de-buff her enemies, meaning that she can create a weakness to her enemies. She can also create buffs to her allies that give them a boost or an advantage to kill their enemies.

Master Staff Wielder: Oz uses her staff (Danta Al Tais) as a primary physical weapon and an alternate way to create dark magic. She underwent physical training and fighting with Captain America and Black Widow to be able to fight in an proficient and advanced level and is able defend herself when she is unable to wield her dark magic. As she trained to create a unique fighting style, she developed a way to deliver fast, violent attacks but in a graceful, flowy way. She was able to suppress the Debian King when he relied purely on his magical strength to defeat her. Oz has a unique fighting style with her staff, considering that it also acts as a mini battle axe to create sharp and powerful attacks to her target. She can incorporate her violet energy into the ax which can create deadly attacks and swings to her target(s). The attacks incorporated with her violet energy can create a shock wave of energy that can be transmitted if Oz attacks or swings her staff. She can also use her dark magic and her teleportation to create a fast attacks to wipe out a large group of her enemies. She creates new staff abilities to create special attacks that can not be normally dealt by most fighters.


Cite error: <ref> tags exist, but no <references/> tag was found
Retrieved from "https://marvelcomicsfanon.fandom.com/wiki/Adelyne_(Earth-616)?oldid=264045"
Community content is available under CC-BY-SA unless otherwise noted.