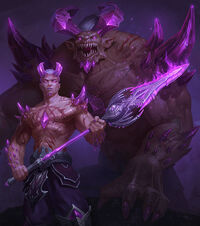 Being the first born Zodiac deity, he was prepared for war. He was born a natural leader. He was made just like his other siblings, to find and destroy Adam Warlock. His instincts allowed him to hunt and run for miles in mere seconds. It is unknown where the crystals growing out of his skin came from. They suspect that it came from the Thing but it got corrupted so instead of The Thing's tissue, he got crystals, which gave him enhanced durability.

After his creators were killed, he thought he had no purpose, so he went on the hunt and found Asgard. They had never though a "human" could go to Asgard without another Asgardian, so the only possible explanation was that he was indeed an Asgardian. He has the normal features and skills of an Asgardian, so it was true. He had the genes of different powerful Asgardians. This meant he was one of Asgard's and Valhalla's strongest warriors and kings.

He has the normal traits of an Asgardian god and much more powers.

Retrieved from "https://marvelcomicsfanon.fandom.com/wiki/Adam_Wrath_(Earth-616)?oldid=263543"
Community content is available under CC-BY-SA unless otherwise noted.