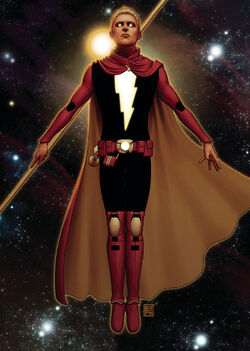 Him, Warlock, Golden Gladiator, Master of all Souls, Stonekeeper of the Soul Stone, High Priest Adam, Jesus of the Universe, Golden Guy, Savior of Worlds
Identity

Single
Occupation
Savior of Worlds and honorary Guardian of the Galaxy; former biological weapon of the Sovereign and servant of High Priestess Ayesha
Origin
Origin
Artificial being, created by researchers of his fellow race, the Sovereign; Cosmic Being
Place of Birth
The Sovereign
Creators

Change and I are constant companions... It is why I believe that even this genocidal, this despot of a Titan can still have the chance to change, as well as this expanding universe is and will ever be...

Days following the battle on Ego's Planet, Ayesha eventually desired to plan her ultimate retaliation against the Guardians of the Galaxy for their theft of the Anulax Batteries and destroying several of her race's Omnicrafts during their attempted escape from the Sovereign. Using an advanced Birth Pod, Ayesha and her selected researchers began creating a being capable of defeating the Guardians. During the process of making the being come to life, Ayesha had her scientists secretly use an ancient relic known as the Soul Stone, which was formerly in the possession of the Sovereign's ancestors, the Enclave. Using the mysterious relic did, in fact, bring the being to life, much to Ayesha's delight. While showing the Birth Pod to her loyal servants, Ayesha decided to call her special creation and biological weapon Adam Warlock, or Adam for short.

Powered by the knowledge of the Soul Stone which gave him his true, pure essence in the first place, Adam would support the existence of the Guardians of the Galaxy as a necessity in the universe for the next several years to come. Adam explained that the universe had been severely damaged since the Reign of Darkness and Damnation which occurred during the early stages of the universe, and soon it would go into a chaotic state due to a series of interconnected events, which not even the Guardians, nor most of the universe's heroic protectors and defenders, could prevent from happening. If another event of that magnitude occurred, it could tear the universe apart and cause the premature tearing of all of reality itself. They needed not only to prevent such a thing from occurring, but also to plug the fissures and help heal the universe, slowly but surely. As a result, instead of following his people's orders, Warlock instead went on his own path and decided it would be best for him to leave his people and their extremist ideologies for more than a million years, and his own creator for a while, much to Ayesha's dismay.

However, despite his altruistic intentions to escape his abusive creators and to ally with and guide the Guardians into truly guarding the galaxy, Ayesha didn't give up on her greatest creation, claiming that if she couldn't control him, then no one else could, not even Adam himself. Responding to Warlock's rebellion, an enraged Ayesha ordered the Sovereign forces to fire against him until he was weakened enough to be put into captivity. Adam unleashed only a few of his newly-discovered powers, which proved enough to take down most of the fleet who fired at him. Unfortunately, the chaos caused by both Adam's fathomless power and the continuous firepower of the Sovereign forces only led to the Sovereign planet's main foundation being severely damaged, causing the planet's core to collapse. In the end, Adam sacrificed himself to keep the core stable with his internal energy. Before sacrificing himself, he told the Guardians that their "adventures" would have to wait. He needed to spin the cocoon in order to adapt to the trauma and try to aid the souls. Unfortunately, Adam's awakening was too early (again) and he was followed by seizures if he used his powers too often. He also learned that he was the prophesied Savior of Worlds across the universe.

The Threat of Thanos

Seeking the fourth stone, the Black Order were ordered by their adoptive father and master Thanos to raid the main planet of the Sovereign, where they slaughtered a portion of its population and tried to take the Soul Stone from Adam, but they failed to do so since they were all outmatched and overpowered by him during the battle. Proving that Adam Warlock was a lot more powerful than they had expected, the Order had to let Thanos arrive while they tried to distract him. Thanos managed to combat Warlock all by himself, with the battle ending in his victory, and he successfully obtained the Soul Stone from the Sovereign defender. The weakened but still determined Warlock quickly traveled across the stars to find the people he had foreseen in his vision and consequently formed the Infinity Watch, a secret cosmic league assembled by Adam to safeguard the six Infinity Gems once they retrieved them from Thanos, in order to prevent the Mad Titan and any other powerful tyrants from ever using such weapons of universal destruction.

However, the alliance of the surviving heroes, antiheroes, and several redeemed villains never gave up on saving the universe, still believing that hope is and will always be there. They teamed up to battle Thanos himself during the finale of the so-called Infinity War, aided by the Cosmic Entities Love, Hate, the Stranger, Epoch, Chaos, Order, and even Galactus himself. But despite the assembled forces, Thanos was able to defeat them all and imprison them until he could execute most of them in a fashionable order.

Although most heroes were seemingly defeated, he overlooked Nebula, who was able to wrestle the Infinity Gauntlet from Thanos' hand. Her first act was to undo all that had occurred, which inadvertently freed the heroes and the cosmic entities and resurrected those who had withered into ash after the Titan's snap. The battle resumed, and in the end it was Warlock himself who finally possessed the Gauntlet. Everyone was surprised that he could withstand the immense power of the Infinity Stones in his grasp unharmed, proving that the prophecy of Him saving the universe from destruction was indeed true. Now holding the Gauntlet, Adam ended the great pangalactic, universal conflict for the Infinity Stones, at least for now.

Defeated after losing the Infinity Gauntlet to the heroes, Thanos faked his own death (which Adam allowed) and he chose to be exiled and secluded on a distant planet far across the galaxy, away from everything that he had accomplished, including his allies, and everyone who had been against him. Despite all of this, Thanos briefly continued to serve Death, although he could never please her, leading him to a long period of introspection. Believing that the Titan was still capable of changing his unethical and unrighteous ways, Warlock made Thanos a member of the Infinity Watch, giving him the Reality Stone, one of the Infinity Stones which Adam Warlock and the Watch guarded in the meantime.

It had only been a few weeks since the end of Infinity War when Adam Warlock's evil and notorious side, whom was dubbed by his followers as the "Magus," had unexpectedly separated from his own body thanks to the Universal Church of Truth, his oldest radical followers, and started his own personal crusade to reassemble the recently-dismantled Infinity Gauntlet. In the process, Magus created doppelgangers of Earth's heroes, and even Thanos, as part of his plan to recreate the universe in his own image, a universe of eternal and infinite wickedness, a vision that was already worse than what Thanos could have imagined, since Thanos truly wished to save the universe, rather than destroy it. In the very end of the conflict, Warlock and the rest of the Infinity Watch (including Thanos) had successfully defeated the Magus with the help of their ally, the Goddess (who also happened to be Warlock's good and noble portion), putting Magus in a catatonic state. He was finally imprisoned inside the Soul Stone's realm, the Soulworld, before parting ways as they disbanded the Infinity Watch, at least for now.

Symbiotic Bond with the Soul Stone: From his experience with the Soul Gem, the Infinity Gem formed a willing, symbiotic bond with Adam, giving him the ability to sense its whereabouts at will. Out of all the hosts the Soul Gem has bonded with, it has stated that Adam was the most powerful of all his hosts, having retained his will under its control. Because of this bond, Adam can render himself immune and even counter the likes of the Soul Gem being used by others.

Superhuman Physiology: Adam Warlock possesses a number of superhuman properties and powers derived from his artificially determined genetic structure. This is owed to his possessing a perfect, genetic template. This perfection was noted by Ultron and the High Evolutionary, who even cited his being was something he could not quite replicate easily.

Ultra Senses: After taking the memories of the Magus from his soul during the events of Infinity Crusade and some of his own abilities as a result, he gained superior senses which allowed him to locate spacial anomalies such as black holes. Adam was later gifted with enhanced perception from his rebirths, allowing him to see the auras, souls and states of others as well as examine others' genetic structure.

Retrieved from "https://marvelcomicsfanon.fandom.com/wiki/Adam_Warlock_(Earth-61615)?oldid=263327"
Community content is available under CC-BY-SA unless otherwise noted.