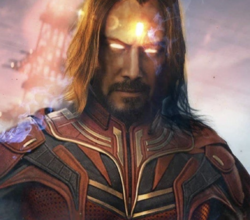 The Perfect Specimen, the Guardian of the Galaxy
Identity

The Infinity Stones are unique. Each one has its own consciousness, of sorts, and a role to play in the universe. To keep them apart would be a shame, but the unholy power one would wield with all six is the last thing they want.

After the Guardians of the Galaxy betrayed the Sovereign race during a job for them, their leader, Ayesha, became dedicated to bringing the Guardians down. She then began crafting the perfect specimen that would be capable of hunting them down and killing them. This resulted in the creation of Adam Warlock.

Imbued with incredible abilities, he was sent off into the galaxy to find the Guardians and bring them back to the Sovereign, dead or alive. He quickly found them, and ended up having multiple confrontations with them. Adam began to think for himself, and after getting a feel for the Guardians as people, he began to reconsider what he was doing. He knew the Sovereign were a very proper and classist people, but the Guardians seemed genuine.

This led Adam to go rogue and begin to amass as much information about the galaxy as he could. He eventually discovered the truth about the Infinity Stones, which led him into conflict with Thanos. Incapable of defeating Thanos on his own, Adam sought out the Guardians once more and offered his assistance to help them prevent the Prophecy of Infinity.

Since then, Adam has been welcomed in as a member of their family. His knowledge and compassion grows with every day, and he starts to feel the Infinity Stones calling out to him. After years of fighting against Thanos, Adam eventually came into possession of the almighty Soul Stone, however not before Thanos was able to sacrifice Gamora to claim it. Heartbroken at the loss, and unable to use the power of the Stone to bring her back, Adam vowed to protect the Soul Stone with his life.

Retrieved from "https://marvelcomicsfanon.fandom.com/wiki/Adam_Warlock_(Earth-101)?oldid=263003"
Community content is available under CC-BY-SA unless otherwise noted.