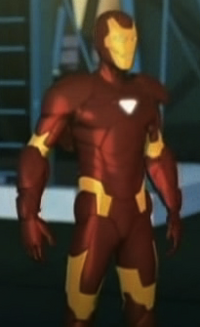 I'm different from my father...but I still love him and I'll follow and achieve my dream of helping people and using technology for good.

Adam is the son of Tony Stark (Iron Man) and blessed with intelligence from him and his father Howard. He's different because he's innocent and not a drinker. He is strong, courageous, determined and holds responsibility for his actions. He still loves his father even though he's embarrassed because of his father's awkwardness. He loves his sister Antoinette and is protective over her.

Equipment: Iron Man Armor (From Armory and his Father)
Transportation: None known.
Weapons: None known.

This character is based on the younger Tony from the Armoured Adventures TV show.

Retrieved from "https://marvelcomicsfanon.fandom.com/wiki/Adam_Stark_(Earth-9821610)?oldid=262912"
Community content is available under CC-BY-SA unless otherwise noted.