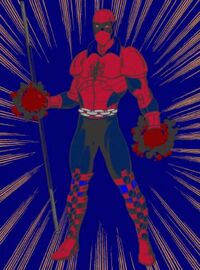 After his parents' divorce, Adam Reilly was raised by his mother. Adam began to show heavy interest in sporting activities at age six, hoping to one day climb Mt. Everest. This dream stayed with Adam for eighteen years. After graduating college, Adam joined an organized group of mountain climbers. However, before he could accomplish his goal of eventually climbing Mt. Everest, Adam's left hand, along with a spider, was crushed in an avalanche, activating his mutant abilities. However, the rock that crushed his hand held an alien symbiote inside of it that restored the spider to life. As the spider's body was weak, the symbiote looked for a new host and bit Adam, granting him spider powers along with his mutant powers. Taking after Spider-Man, Adam decided to fight crime using his newfound abilities along with a color-swapped costume and a makeshift "web-spinning" baton.

Equipment: Spider-Armor: Adam's entire costume functions as a suit of armor, able to protect him.
Transportation: None known.
Weapons: Web Baton: Adam has a baton that allows him to spin webs in a similar manner to Spider-Man, but he has to control his webs more delicately as it is, after all, a baton. The baton can shoot webs from either end of itself.

Retrieved from "https://marvelcomicsfanon.fandom.com/wiki/Adam_Reilly_(Earth-9420)?oldid=262910"
Community content is available under CC-BY-SA unless otherwise noted.