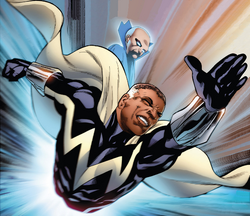 Nobody knows me, but now I'm an Avenger. I'm ready. The world will know my name.

Blue Marvel's history is the same as that of Earth-616's Blue Marvel up until the Marvel NEW! relaunch.

Blue Marvel was briefly seen in space in the company of Uatu the Watcher. It is believed he mimicked the Power Cosmic. He then returned to Earth and fought alongside the New Avengers before joining them.

Anti-Matter Manipulation: Blue Marvel retains his 616 powers, though they have been strengthened from possibly mimicry of the Power Cosmic:

Blue Marvel has intellect surpassing that of humans, and has been trained by the military in armed and unarmed combat.

Retrieved from "https://marvelcomicsfanon.fandom.com/wiki/Adam_Brashear_(Marvel_NEW!)?oldid=234947"
Community content is available under CC-BY-SA unless otherwise noted.