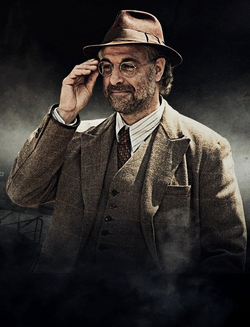 Whatever happens tomorrow you must promise me one thing. That you will stay who you are. Not a perfect soldier, but a good man.

Abraham Erskine has the same history as that of his Earth-199999 counterpart, up to and including his off-screen death shortly after the birth of Captain America.

Dr. Erskine was a genius in the fields of chemistry and medicine. He successfully developed a "Super Soldier" formula and is the only person ever to know the exact recipe, which scientists were unable to duplicate precisely, even decades later.

He was also wise enough to see the importance of choosing a candidate that was at his core a good man over a soldier who was fit, trained, and followed orders.

Retrieved from "https://marvelcomicsfanon.fandom.com/wiki/Abraham_Erskine_(Earth-1010)?oldid=264773"
Community content is available under CC-BY-SA unless otherwise noted.