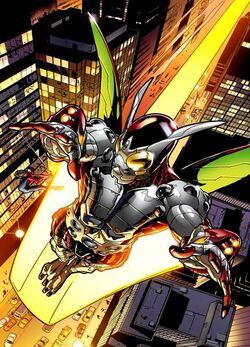 Single
Occupation
Professional criminal, international fugitive and terrorist, trained mercenary; former mechanic
Education
Few college degrees, including an engineer's degree
Origin
Origin
Human; Jenkins was a mechanic for an aircraft producer, but tired of not getting promotions he thought he deserved he decided to strike out on his own. Using a suit of armor, Jenkins became the Beetle.
Place of Birth
Baltimore, Maryland
First appearance
Modern Comics:
Spider-Man Annual
Vol 1 8

What did you just say to me?! I'll be tellin' you who's the bug, after I get to squish ya' little prick!

Abner Ronald Jenkins was just a normal, low-life master mechanic for an aircraft producer. Tired of his boring, low paying job and not getting promotions he thought he deserved he decided to strike out on his own in search of fame and fortune. As a result, Jenkins chose to invent his own version and design of the rising and trending Iron Man armor, so he could get the chance to show proudly it on live television, wishing to be recruited by the world famous Stark Industries if he did it.

At some point in his early adulthood, his crew was on a flight to the Arctic in order to shoot a highly-anticipated documentary, when suddenly, the plane they were in was critically hit by an unknown missile and crash-landed on a mysterious coast somewhere across Europe, later revealed to be the border of the eastern European country of Latveria.

Jenkins tried to escape the situation using his prototype suit and fly his way out of the plane, only to be unluckily caught by the detached falling wing of the plane, causing him to plummet down into the ground as well. Thankfully, Jenkins' immediate impulse to wear and use the suit had actually saved his life in the first place, unlike his fellow crew-mates, who seemingly perished during the crash. Soon, he was formally and "peacefully" approached by the dictator Latverian monarch himself, Victor von Doom, who came for Jenkins' aid. He gave a confused Jenkins the chance of salvation by offering him refuge and settlement within the small, seemingly peaceful country.

Birth of the Beetle

As a last second opportunity to leave his burdening past life behind and start a new beginning within the country of Latveria and serve a new purpose in his life, Jenkins willingly accepted Doom's offer, thus he became an official resident of the eastern European nation without any signs of regret on starting over again.

Using the suit of armor he successfully upgraded single-handedly using only advanced parts of Latverian technology, Jenkins was extremely trained for a while, before he eventually became the notorious elite Latverian mercenary and a tactical commander of the Secret Latverian Agency, known by the infamous moniker of the Beetle. Working as an operative for the Latverian Government, Jenkins was given several different tasks on his missions, mainly to capture or even neutralize specific individuals who once did or still pose a great threat to Doom and the consistent peaceful and quiet nation of Latveria.

For the next few years, some of his missions involved his unending encounters with the anti-heroic team known as the Thunderbolts, wherein Jenkins had found a love interest in the founding member Songbird, whom he eventually fell in love with despite knowing her long-time relationship with the leader Helmut Zemo. Following their first known encounter, Beetle eventually became both an antagonist to and an ally of the Thunderbolts due to several different reasons, including his confusing, on-and-off loyalty to the Kingdom of Latveria.

One other mission also included the Beetle being tasked to infiltrate a secretly moving S.H.I.E.L.D. truck within New York in order to obtain a few samples of each version of the Super-Soldier Serum S.H.I.E.L.D. had made for the decades following the second World War, but the truck had unintentionally crossed paths with the heroic web-slinger Spider-Man, who came to the scene to interrupt Jenkins' ongoing heist. The two then clashed across the city after the hero managed to drag Jenkins out of the moving truck, almost ending in Jenkins' victory over the hero, implying that "Doom sends his regards," revealing his loyalty to Doom. That was, until Spider-Man was able to slightly damage his suit, making Jenkins lose his balance and crash into the Hudson River.

After Jenkins' successful escape from the authorities since he was defeated by Spider-Man, he made an ultimate decision to break his chains and finally leave his long-time allegiance with Doom and the rest of the Latverian authority after overhearing Spider-Man's secret conversation with the Fantastic Four's Reed Richards inside the headquarters of the Baxter Building, knowing that it would be risky to be involved with his superior, whom he found out that Doom was not the person he thought he was, when he first met him.

Since his departure from Doom and the Latverian Government, the Beetle became a lone wolf, deciding to use his fixed suit, along with his next three upgraded versions of the armor, in order to pursue a life of crime in order to keep his own life running by himself, all for the intention of consistently gaining wealth, and continue his reputation and status as an elite mercenary, now working alone.

Retrieved from "https://marvelcomicsfanon.fandom.com/wiki/Abner_Jenkins_(Earth-61615)?oldid=276338"
Community content is available under CC-BY-SA unless otherwise noted.