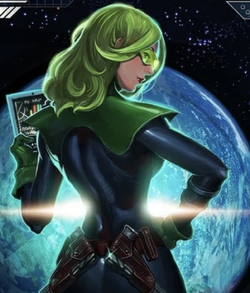 That Bitch with the Green Hair
Identity

It's my personal goal to kill at least one bad guy from each of the Nine Realms before this is all over.

Abigail Brand is a mutant/alien hybrid who joined S.H.I.E.L.D. at a young age. She eventually climbed the ranks and was appointed Director of S.W.O.R.D., their new space-faring sister organization.

S.W.O.R.D. was able to detect the incoming attack from the Order of the World Tree about two minutes before it began. When the Damocles ship was destroyed by Surtur, Brand was the only survivor. She later rendezvoused with several of her former allies in Latveria, where they re-established both S.H.I.E.L.D. and S.W.O.R.D. in order to maintain a solid defense and offense against the Order.

Retrieved from "https://marvelcomicsfanon.fandom.com/wiki/Abigail_Brand_(Earth-2001)?oldid=262953"
Community content is available under CC-BY-SA unless otherwise noted.