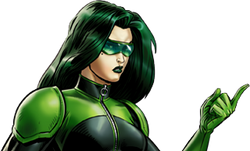 Green
Unusual Features
Brand has a tattoo on each arm; one reads "Grace" the other "Anna"
Status
Marital Status

Abigail Brand has the same origin as her Earth-616 counterpart.

Director Brand faced Kang when he came to take over Damocles, and ultimately lost the ship to him.[2]

Director Brand was seen in a flashback observing the beginning of the Kree-Skrull war through an ambush by Pagon and his soldiers.[3]

Flame Generation: Brand has exhibited the ability to coat at least her hands in flame that is potent enough to burn through most metals via tactile contact. This flame has been shown colored both blue and red, though it is unknown whether the colors have any specific significance. Although it was originally believed that this ability stems from her half-alien heritage, Brand herself revealed that her power is the result of her half-human heritage and is mutant in nature. She has enough control over her powers to either heat or set others a flame.

Enhanced Durability: Brand survived a laser cannon blast to the torso. How this was possible, however, has yet to be explained.

Multilingualism: Her tongue has the ability to shape alien languages that humans are unable to make.

Retrieved from "https://marvelcomicsfanon.fandom.com/wiki/Abigail_Brand_(Earth-1010)?oldid=266673"
Community content is available under CC-BY-SA unless otherwise noted.