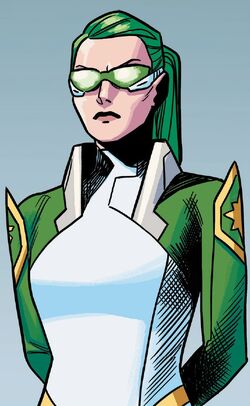 Alright, listen up you sons of bitches. This blaster here is super high tech, alien and everything, so it doesn't really make a super intimidating noise when I turn it on, so I'm just gonna have to ask you all to act intimidated before I disintegrate you. Can you do that for me?

Half-mutant and half-Saurid, Abigail Brand always knew she was destined to use her abilities for good. She went on to join S.H.I.E.L.D. and quickly became one of Nick Fury's most trusted agents.

After Fury discovered the Prophecy of Infinity, he began implementing the Sentient World Observation and Response Department, to monitor the reaches of outer space. Abigail was Fury's first and only choice to lead S.W.O.R.D., and she quickly became dedicated to protecting the Earth from interstellar threats. She was so good at her job, that Fury began to make her his top candidate to one day take over as the Man on the Wall.

Retrieved from "https://marvelcomicsfanon.fandom.com/wiki/Abigail_Brand_(Earth-101)?oldid=255902"
Community content is available under CC-BY-SA unless otherwise noted.