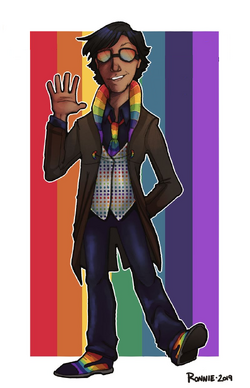 Even gods are blind...to the spectrum of possibilities...

Aaron Verne was a lowly bank teller who was dissatisfied in his career. Though wholly qualified, and actually more intelligent than all of his coworkers, he was ridiculed for his desire of more intellectual grandeur. Because his aspirations caused him to be a lackluster employee, he was eventually terminated. While studying his passions at home, he realized that when he imagined a certain shape, he could cause it to manifest in thin air, and the stronger his focus, the more durable the construct. With a few days of practice, he returned to the bank and robbed it, planning to use the money to attend university and become a prestigious scientist. Unbeknownst to him, one of the customers at the bank was secretly Donald Blake, also known as the mighty Thor. Thor soon appeared and engaged the self-proclaimed Locus in combat, forced onto the defensive due to the strong offensive nature of Aaron's powers. Despite the fact that he nearly defeated Thor, his constructs ultimately suffered too many blows, and he was knocked unconscious by his adversary, though he was ultimately able to regain consciousness and escape in the ensuing confusion.

Aaron was a mutant with the ability to create energy constructs with his mind. These constructs were composed of psychic energy, and took on a reddish, glowing appearance. He could create constructs of any size or shape, but preferred to create simple geometric shapes and forms (although he created other, much more massive shapes when necessary). When amplified by the Power Prism, his constructs were capable of withstanding blows from Thor and Valkyrie. He has formed force fields with his powers, and levitated disks on which he could simulate flight.

Aaron has above-average intelligence, but still overestimates it.

Equipment: None known.
Weapons: Power Prism: The Power Prism is a crystal that absorbs and focuses ambient energy, using unknown alien technology to grant its wielder a variety of energy-based powers. These include:

Retrieved from "https://marvelcomicsfanon.fandom.com/wiki/Aaron_Verne_(Earth-166)?oldid=242247"
Community content is available under CC-BY-SA unless otherwise noted.