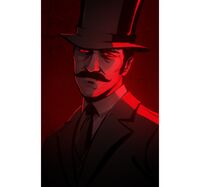 A'Lars was one of the 97,000 Eternals created by David Cannon using the Celestial Hive-mind. He is nothing like the original Eternals who were known to be vicious, cruel and cannibalistic. Like many Eternals, he has three sons, Eros, Thanos and Midas, who was kidnapped by a Celestial and taken to Earth. Since he was created using the Celestial Hive-mind, he became obsessed with its power and wanted to absorb it.

Search For His Son

Eros and A'Lars agreed to disguise themselves as humans while Thanos looked after Titan and the other Eternals. A'Lars took up the identity of Ted Sallis, a marine biologist. He soon met Dr. Henry Walters, who he thought to be his son. Sensing supernatural energy and life signs, he was confused, but it turned out that Walters wasn't A'Lars' son after all, and was just a guy named Antonio Rodriguez who was experimented upon. A'Lars was in shock, as Antonio was disfigured, with a body similar to an armadillo. He asked Antonio to help find his son, and he joined the Avengers in order to do so, but this proved ineffective until he noticed that his teammate, Bruce Banner, had stopped turning human for the last few days and was stuck in a green strong giant form.

He tried to get to know Bruce before telling him the truth, but Bruce disagreed every time he suggested that they should spend time together, as Bruce found it suspicious how Sallis would always annoy him with the same question. A'Lars then asked Thanos to collect some DNA from Bruce, but he was extremely uninterested, so Eros did it instead. Thanos didn't like A'Lars, and noticed that he treated his children like servants. He tried to convince Eros that this was the truth, but because of his selfishness, stupidity, and perceived superiority, didn't believe him. A'Lars observed most of these conversations, and Thanos, not wanting to do what A'Lars told him anymore, decided to become an intergalactic peacekeeper. A'Lars and Eros chuckled at the idea, Thanos eventually proved them wrong and became one.

Plans Thwarted and Formation of Ruler Regard

Thanos then met Bruce and told him everything, and they formed a secret plan. A few years later, Bruce and Thanos along with some other members formed the Ruler Regard. A'Lars joined Antonio's rebellion which also included James Howlett, Jennifer Walters and Kallark, who were all his good friends, in an effort to kill both his sons. A'Lars organized an attack on Intergalactico, but he didn't just fail at killing his sons, he was also killed by his grandson for betraying Bruce (though A'Lars was avenged by Antonio).

Resurrection and Confrontation With Bruce

He was later resurrected by Antonio, who retrieved his soul from Lord Wolverine, his former Rebellion teammate James Howlett. He then left the Rebellion, in order to focus on his plans to absorb the Celestial Hive-Mind and steal it from his creator, David Cannon. A'Lars then revealed his true identity to every member of the Rebellion, including former ones, though he didn't reveal his plan. He planned to try and get at least one of them on his side, and he confronted Bruce, but was dismissively thrown back to Earth. A'Lars then hired Kyle Richmond to kill Cannon and steal the hive-mind, but Richmond failed.

A'Lars was hugely afraid of Cannon and his power, so he didn't want to confront him directly, and thought that if he were to steal the hive-mind without hurting or killing him, he would be caught. He rebranded himself Hypocrisy as he thought his old alias of "the Stranger" didn't fit him any more. He then turned his son, Eros, into a hunchbacked slave.

Retrieved from "https://marvelcomicsfanon.fandom.com/wiki/A%27Lars_(Earth-37U)?oldid=262081"
Community content is available under CC-BY-SA unless otherwise noted.