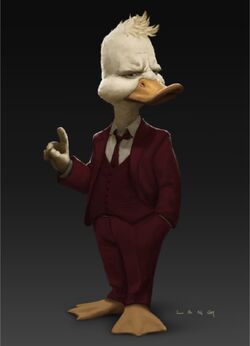 Earth-61615
Base Of Operations
Mobile across the universe; formerly the Collector's Museum
Characteristics
Gender

No Hair
Unusual Features
Howard's body, like those of his entire race, has similar characteristics to those of both common Earth ducks and common Earth human beings. He has hands and arms instead of wings, is covered with feathers and is unable to fly. His feet are less webbed than Earth ducks and more human like but still bear resemblance to duck feet.
Status
Citizenship

I know I'm not supposed to say this 'cause it seems racist, but quack quack to you, motherf***er!

An intentionally unnamed sentient duck-like creature was the most intelligent member of the Duckworldians, the main species of the isolated planet informally known as Duckworld. However, one unfortunate day came when alien invaders came to colonize his planet. The creature and his species tried to fight off the invaders, only to horrifically fail due to the Duckworldians' primitive tech and weaponry, ending with him, along with a few representatives of his race, being abducted by alien scientists and brought to the planet of Halfworld, located in the Keystone Quadrant star system. There, he and his race were genetically and cybernetically enhanced so that he was given sentient levels of abilities. Being experimented upon by Otherworlders, he was given the designated name of Subject: 79I21, his first known name in his life. However, years of complex treatment caused him to develop a rebellious but charming personality, and he became a Halfworlder mechanic, weapon inventor and marketer, and consultant by the moment he survived all the treatments and started his life anew as he eventually becomes a renowned Halfworlder citizen, publicly calling himself Howard Duckson, a common Terran first name and a last name that he was forced to use after other citizens saw his appearance a resemblance to planet Earth's ducks. As a weapons marketer, Howard began to run a secret business similar to a black market's, only legal in accordance to Halfworld's public policies, gaining loyal costumers which included the ruthless Rocket Raccoon and his passionate partner Lylla, a decision which eventually gave Rocket and other prisoners and mercenaries the ultimate opportunity to escape their enslaved lives in Halfworld, something that got Howard into trouble.

Quest for the Orb

After being detained by the Halfworlder government for helping the escape of previous Halfworlder experiments, Howard was sentenced to become a specimen in the Collector's museum, and he was there when the Guardians of the Galaxy brought the Orb (containing the Power Stone) to him. Angrily exhausted at how Tivan had treated her and her predecessors, Tivna's assistant Carina unleashed the Orb's power, destroying much of the museum. Howard would later appeared in the Collector's devastated archive once he returned defeated. The dog Cosmo licked Tivan's face, much to Howard's disgust. Howard was freed from his glass cage and now had the ability to leave, something that Tivan couldn't care less about. A few months later, Howard would leave the ruins of the Collector's museum in Knowhere and travel to the brothel planet Contraxia to settle there in the meantime, where he was seen having a date with a woman named Bevarlene in the Iron Lotus.

The Threat of Thanos

During the decimation of half the universe, Howard the Duck was among the half who survived Thanos' genocidal snap, although his now long-time lover Bevarlene did not as the latter withered in ashes, much to Howard's disappointment at losing her so unexpectedly. Five months after, Howard was teleported to the Sanctuary from Contraxia to fight in the massive final battle against Thanos for the Infinity Gauntlet, accompanied by the Ravagers, in their mission to reverse the effects of the cosmic snap and return the half of life that withered away.

Enhanced Duckworldian Physiology: Originally as a Duckworldian, Howard possessed no known superhuman or "superduck" powers. Howard's body, like those of his entire race, has similar characteristics to those of both common Earth ducks and common Earth human beings. He has hands and arms instead of wings, is covered with feathers and is unable to fly. Howard is similar to a human athlete who has trained his body to the fullest. However, when he was experimented by the scientists of Halfworld, his abilities were enhanced in a nigh-superhuman level, surpassing the rest of his kind's normal, inferior physiology.

Retrieved from "https://marvelcomicsfanon.fandom.com/wiki/79I21_(Earth-61615)?oldid=255281"
Community content is available under CC-BY-SA unless otherwise noted.